Before we go further into the details, first thing you might wonder. What is Gold Leaf? It is gold that has been hammered into a very slim and thin sheet with the approximately of 0.1 micrometer thick. The process of pounding the solid gold into a fine sheet is also known as Gold-beating. In the field of fine art creation, the act of layering gold leaf over a surface of the painting artwork is called Gold Leafing or Gold Gilding. 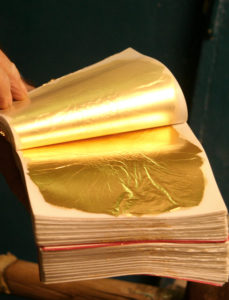 In the traditional Thai painting, using gold leaf to decorate the artworks has long been originated in Siam kingdom since Ayutthaya era. Especially during the 22 – 23 B.E. the traditional Thai water gold gilding had reached its highest popularity. In Thai, Gold gilding is called ‘Lai Rod Nam – Long Ruk Pid Thong’. The dazzling elegant gold color can greatly enhance the luxurious touch to any kind of artworks.

Hence, the gold accent art technique has been famously adopted in Buddhist art and the Royal Palace decorations. Some of the best examples are including the Buddhist scripture cabinet from Wat Choeng Wai Temple in Phra Nakhon Si Ayutthaya Province. And another is the Lacquer Pavilion of Suan Pakkad Palace in Bangkok, which has the ancient gold wall painting of reclining Buddha.

Then later in the early Rattanakosin era during the reign of king Rama III – IV was the flourish time for Thai art development and innovation. Because of the international trade and barter with other countries, the gold leafing art had been influenced and infused with the Chinese and Western mixes. Gold gilding is a very delicate spectacular art. It is a unique technique that needs a combination of both well-experienced handmade craftsmanship and intricately creative inspiration in order to make the amazing masterpieces.

Traditional Thai gold leafing work is an art wisdom that has been inherited from generation to generation since the ancient time. Thus, it has become the culture and tradition of Thailand’s art. Moreover, Thais use the natural Lacquer Varnish from the tropical Lacquer Trees to create art and craft works. The natural Thai lacquer wax has a special adhesive ability with high durability. It can perfectly glue the object’s surface with other materials and has been used in art and decorative work since the ancient time.

For Thai Gold Leafing artworks, the painters and artists always apply the natural lacquer varnish on the background of the work before decorate it with gold leaf. This special art technique is a distinctive Thai wisdom, invented to make Thai art resistant to moisture and durably long-lasting.

Thai Gold Leafing art is the best creation and has the most value and beauty of the works. Nonetheless, not only in Thailand, but in many East Asian countries believe that the illuminated yellow gold color is a symbol of prosperity. It is Royal Thai Art’s greatest pride to be able to continue and widespread the Siam legacy of cultural fine art heritage to the world. We has been proudly preserved the traditional Thai skill in creating gold leaf art paintings in this day.