About this Samudra Manthan Thai Art

Our Thai artist has created a stunning masterpiece of Samudra Manthan, or also known as the Churning of the Ocean. It is a famous scene from the Hindu mythology that describes the creation of Amrita, the nectar of immortality. The image of this legendary scene is very popular in Thai culture. Even before you leave the country at the International Airport Bangkok (Suvarnabhumi), you will see a large impressive statue of the Samudra Manthan event in the center of the duty free shopping area.

Scene of The Churning of The Milk Ocean

This scene depicts the Vishnu Kurmavatara and the churning of the Milk Ocean. The 3-headed naga (the king of serpents), Vasuki, is curled around the mountain Mandara. Vishnu, incarnated in the form of a great turtle, supports the mountain on his back. Devas (demigods) and Asuras (demons) pull on the naga’s body to churn  the water of the ocean for thousands of years in order to produce the nectar of immortality, Amrita.

From the Churning, numerous opulent items are produced, including Dhanvantari carrying the pot of Amrita. In the end, the cooperation between Devas and Asuras is shattered. The Devas, fulfilling their plan of acquiring all Amrita, disperse the Asuras out of Heaven to the Underworld.

Royal Thai Art provides free of charge domestic art delivery to your door all over the country. Yet, we ship Thai paintings worldwide with the most suitable couriers. This Samudra Manthan Thai Art comes with a solid pine wood frame and well covered with plastic bubble wraps and packaged in a carton box. It is ready to hang on wall when arrived with installed hangers behind the painting.

The actual painting might be slightly different from the display image due to camera light and/or brightness of screen monitors. Likewise, due to the nature of being handmade and hand-painted, each canvas art reproduction may slightly vary in brush details. 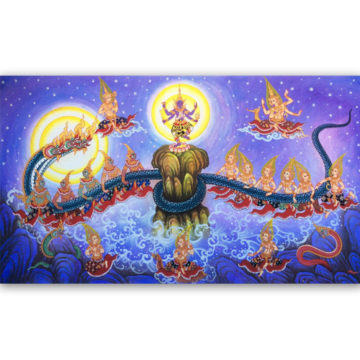